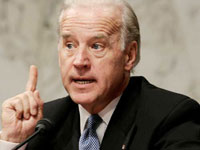 The Delaware senator encountered the group in the lobby of the New Hampshire statehouse on his way to filing his candidacy with the secretary of state's office, and gave a detailed answer to a question adults don't often ask candidates: How did the war in Iraq start?

Biden compared the war in Iraq with the invasion of Afghanistan.

"Osama bin Laden set up camps there, and he was getting a lot of help from folks running that country called Afghanistan. And that's where he planned an attack on America to bring the World Trade Towers down and kill all those innocent Americans. We had a right to, and we should've gone, to Afghanistan to try to get bin Laden and those people who've done very bad things to America," he said.

"But the president, I think, he got a little confused," he continued. "I think he thought the folks in another country, way, way far away, far from here, it's also far from Afghanistan, called Iraq. He said, 'The guy in Iraq he helped bin Laden do bad things to us,' and he didn't. He wasn't a good guy, but he didn't help. So we used that kind of as an excuse to attack Iraq."