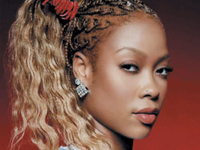 A dispute at a night club led to arrest of rapper Da Brat early Thursday.

Witnesses told police the 33-year-old rapper got into an argument with a waitress and later hit her over the head with a bottle of rum, Atlanta television station WSB reported.

A bonding agent the DeKalb County jail says Da Brat, whose real name is Shawntae Harris, was booked into the jail on a charge of aggravated assault, a bonding agent at the jail said.

Hits by Da Brat include the song "Funkdafied." She also has appeared on reality shows such as "Celebrity Fit Club" and "The Surreal Life."