Mills McCartney blames Paul and speaks out against tabloid

Mills McCartney criticised the tabloid for incessantly issuing articles surrounding her divorce that have brought out death threats against her, and imputed blame to Paul McCartney. 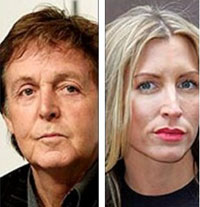 Mills McCartney blames Paul and speaks out against tabloid

"All I can say is when we first split, I said to Paul, 'I'm going to be crucified. ... You know why we split. You know the truth. They don't need to know the details, but you need to stand up and say, "I'm responsible for the breakdown of this marriage,""' Mills McCartney said on NBC's "Today," one in a series of interviews with U.S. morning talk shows.

"If you say that, I'll walk away with nothing, and we'll do a very gentle and quick divorce. And he promised he'd do that. I have evidence of that. And he did nothing," Mills McCartney said.

Mills McCartney broke her silence Wednesday about issues surrounding her divorce case with the former Beatle in interviews on British television. She said that the police told her "serious death threats" had come from an underground movement.

Mills McCartney was asked Thursday whom she thought was behind the threats.

"Well, I can't say who I think it is because it will affect our family. but I know a lot of information, and, you know, certain people don't want certain things coming out because of their image," she told NBC.

McCartney declined to respond to the British interviews.

"And the problem in England is with the libel, there is a cap on cost and damages. So they will get six months of abusive lies front page news out of you, and then they will only have to pay $50,000 to $100,000 damages. ... In the meantime, they've created devastation everywhere, and you get an apology the size of a postage stamp," she said.