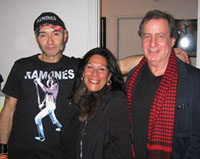 A medical examiner said Thursday that a pioneer in New York's punk music scene who later became known as a real estate "broker to the stars" - Linda Stein – was beaten to death inside her Manhattan apartment.

Stein's daughter found her body Tuesday night face down in the living room of the Upper East Side apartment, where she lived alone. There were no signs of a break-in or robbery, and police said they had no motive or suspects.

An autopsy found that Stein, 62, died from blows to the head and neck, medical examiner spokeswoman Ellen Borakove said Wednesday.

Stein was the ex-wife of Seymour Stein, former president of Sire Records, which was the launching pad for the Ramones, Talking Heads and Madonna.

A former schoolteacher, she and Danny Fields co-managed the Ramones during the band's heyday. She is credited with bringing the Ramones to England for their infamous July 4, 1976, concert that helped spark the young British punk scene.

Reached Wednesday by telephone, Fields said Stein had the right temperament for the rough and raunchy world of punk.

"She was very tough, but very loving and generous," he said.

Friends and family were stunned by the news she was a victim of violence, Fields said.

"It was enough dealing with her death," he said. "Now it's a murder."

After Stein and Fields parted ways with the Ramones in 1980, she eventually launched a real estate career brokering multimillion-dollar Manhattan apartments for rock 'n' roll royalty, including Sting and Billy Joel.

Aside from real estate, "her great joy in life was her first grandchild," a 3-year-old girl, Fields said.

Stein was asked in an interview earlier this year whether managing the Ramones or selling real estate was harder.

"Real estate," she responded. "Firstly, if you manage a band, every time you hear an encore, every time the audience increases, every time your radio increases, it's an upper. With real estate, the only upper is how much you don't owe to Uncle Sam on the check you're getting. There is no high except the money, which is extremely taxable."