An increased number of cases of a rare blood cancer was found in northeastern Pennsylvania but no link to any possible cause in the environment was uncovered. 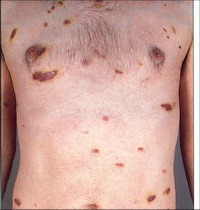 The U.S. Agency for Toxic Substances and Disease Registry became involved after residents expressed concern about polycythemia vera, or PCV, a cancer that results in the overproduction of red blood cells and can lead to heart attack or stroke.

"We did not find any environmental links to the PV cases we interviewed," Vince Seaman, the lead researcher, said Thursday in an e-mail. "That doesn't mean that there weren't any - we just didn't see anything with the information we collected."

The agency reported on its findings Wednesday night at a heated community meeting at which residents of this low-income coal region accused the government of minimizing the threat posed by numerous environmental hazards, including a former toxic waste dump where some PCV patients live.

"This is an outrage," said Dr. Peter Baddick, a local internist who was among the first to sound the alarm about PCV. "You downplayed it."

Government epidemiologists defended themselves, saying the study was not meant to be definitive.

"There's no conspiracy to hide the information," said Steve Dearwent, chief of health investigations for the Agency for Toxic Substances.

"There's an elevation here," he said. "We're committed to looking further at these groupings of cases."

Some patients diagnosed with PCV live near a site in northern Schuylkill County, about 80 miles (129 kilometers) northwest of Philadelphia, where a recycler called McAdoo Associates accepted hundreds of thousands of gallons of paint sludge, waste oils, used solvents, PCBs, cyanide, pesticides and many other known or suspected carcinogens.

Environmental officials shut down the site in 1979, and it was later placed on the federal Superfund list and cleaned up.

Residents fear that chemicals leached into the region's water supplies and polluted private wells and public reservoirs. State and federal environmental officials have said for years that McAdoo Associates does not pose a health threat.

The Agency for Toxic Substances became involved after 97 cases of PCV in Schuylkill, Carbon and Luzerne counties were reported to the state cancer registry between 2001 and 2005. Based on its population, the region should have reported about 25 cases.

The agency's task was to confirm the cases that appeared on the registry and to search out cases the registry might have missed. Scientists also tried to find commonalities among PCV patients, including their proximity to toxic waste sites.

"We didn't find any commonalities among the cases with respect to their water source, residential history, occupational history," Dearwent said.

The agency confirmed 38 cases of PCV, with elevations in certain ZIP codes of Schuylkill and Luzerne counties.

Epidemiologists cautioned that the study was limited due to a number of factors. Chief among them was that epidemiologists could only study 38 of the 97 patients whose PCV cases were reported to the state registry; the rest were either dead or they refused to participate.

Investigators also were limited by the fact that the cause of PCV is unknown. The government estimates that it occurs in one in every 100,000 people, although some scientists believe it is even more rare. The disease, which is treatable, is more prevalent in older people and men.