Hundreds of injuries linked to Medtronic Inc.'s heart defibrillator wires were reported to the U.S. government by last winter. 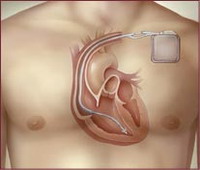 Medtronic pulled its Sprint Fidelis defibrillation wires off the market Monday, after identifying five patient deaths in which broken wires may have played a role.

These wires, officially called leads, connect patients' hearts to a device that sends an electrical shock if it senses a life-threatening abnormal heart rhythm. A fractured lead can leave the defibrillator unable to send a lifesaving shock, or prompt it to deliver painful unnecessary shocks.

The U.S. Food and Drug Administration had received 599 reports of malfunctions and injuries associated with the Fidelis leads as of Jan. 10, including 204 where patients had been inappropriately shocked, according to a count by the consumer group Public Citizen.

"Why did the FDA, aware of the rapidly mounting number of injury reports, not force the company to recall defibrillators not yet implanted in the early part of this year?" Public Citizen's Dr. Sidney Wolfe wrote FDA's commissioner on Tuesday.

Wolfe said since Jan. 10, FDA had received another 1,030 reports of malfunctions.

The FDA would not respond to Wolfe's letter Tuesday - but noted that any defibrillator lead can break, and insisted there was no early evidence that the Fidelis was riskier than others.

"Once the needle in the haystack has been pointed out to people, it seems like it's obvious to see," said FDA's Megan Moynahan, who led monitoring of the device.

Still, "we will go back and look at our actions and say, 'Should we have done something a little bit different?"' she added.

Medtronic spokesman Robert Clark said the company acted as soon as it "had the appropriate information to make a decision ... and we did so with patient safety and well-being as our primary concern."