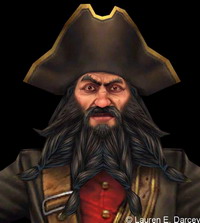 A cannon was raised from a sunken ship that could have belonged to the pirate Blackbeard.

The roughly 8-foot (2-meter)-long cannon was pulled from an ongoing excavation at the presumed site of the ship, the Queen Anne's Revenge.

Historians believe Blackbeard's ship ran aground in Beaufort Inlet in June 1718. State archaeologists have researched the shipwreck for 10 years but are still looking for a indisputable link to Blackbeard.

The current three-month expedition began in August and is expected to recover thousands of artifacts.