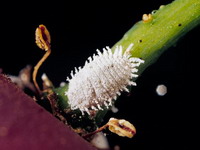 Alfred Benjamin, the islands' chief agricultural officer, said Saturday that a team is trying to determine the extent of the pink hibiscus mealybug infestation discovered in recent days on the western tip of Cayman Brac, the westernmost island in the three-island Caribbean chain.

Officials plan to combat the pest with tiny parasitic wasps that were used to fight an infestation in fruit trees on the main island of Grand Cayman in June 2006, Benjamin said in a statement.

"We have already alerted our partners overseas that we will need additional supplies of the parasitic wasps," he said.

The wasps, which are almost invisible to the naked eye, lay eggs inside mealybugs. Once hatched, the larvae feed on the pest internally, causing it to die. The wasps pose no threat to humans.

Benjamin said the pink hibiscus mealybug, which feeds on the sap, roots and leaves of plants, likely piggybacked its way to Cayman Brac on a traveler. He said it has not spread to Little Cayman, which is located between Grand Cayman and Cayman Brac.

Mealybugs have destroyed millions of dollars (euros) in crops and ornamental plants across the Caribbean since they were first reported in the Western Hemisphere in 1994, in Grenada. They reached the U.S. Virgin Islands in 1997 and Puerto Rico a year later.