A small study links the type of bacteria living in people's digestive system to a desire for chocolate. Everyone has a vast community of microbes in their guts. But people who crave daily chocolate show signs of having different colonies of bacteria than people who are immune to chocolate's allure. 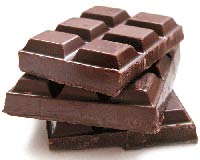 That may be the case for other foods, too. The idea could eventually lead to treating some types of obesity by changing the composition of the trillions of bacteria occupying the intestines and stomach, said Sunil Kochhar, co-author of the study. It appears Friday in the peer-reviewed Journal of Proteome Research.

Kochhar is in charge of metabolism research at the Nestle Research Center in Lausanne, Switzerland. The food conglomerate Nestle SA paid for the study. But this is not part of an effort to convert a few to the dark side (or even milk) side of cocoa, Kocchar said.

In fact, the study was delayed because it took a year for the researchers to find 11 men who do not eat chocolate.

Kochhar compared the blood and urine of those 11 men, who he jokingly called "weird" for their indifference to chocolate, to 11 similar men who ate chocolate daily. They were all healthy, not obese, and were fed the same food for five days.

The researchers examined the byproducts of metabolism in their blood and urine and found that a dozen substances were significantly different between the two groups. For example, the amino acid glycine was higher in chocolate lovers, while taurine (an active ingredient in energy drinks) was higher in people who did not eat chocolate. Also chocolate lovers had lower levels of the bad cholesterol, LDL.

The levels of several of the specific substances that were different in the two groups are known to be linked to different types of bacteria, Kochhar said.

Still to be determined is if the bacteria cause the craving, or if early in life people's diets changed the bacteria, which then reinforced food choices.

How gut bacteria affect people is a hot field of scientific research.

Past studies have shown that intestinal bacteria change when people lose weight, said Dr. Sam Klein, an obesity expert and professor of medicine at Washington University in St. Louis.

Since bacteria interact with what you eat, it is logical to think that there is a connection between those microbes and desires for certain foods, said Klein, who was not part of Kochhar's study.

Kochhar's research makes so much sense that people should have thought of it earlier, said J. Bruce German, professor of food chemistry at the University of California Davis. While five outside scientists thought the study was intriguing, Dr. Richard Bergman at the University of Southern California School of Medicine, had concerns about the accuracy of the initial division of the men into groups that wanted chocolate or were indifferent to it.

What matters to Kochhar is where the research could lead.

Kochhar said the relationship between food, people and what grows in their gut is important for the future: "If we understand the relationship, then we can find ways to nudge it in the right direction."