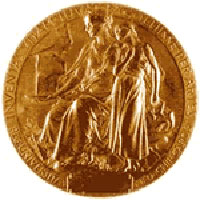 The process has been used to help science determine why some diseases, such as cystic fibrosis, strike people at a cellular level, as well as models in mice that show how human disorders like cardiovascular and neuro-degenerative ailments, along with diabetes and cancer, exist and strike otherwise healthy people.

The discovery of the enzyme that broke new ground in research on cancer and aging may earn the Nobel Prize in medicine for U.S. scientists. This prize is the first of six prestigious awards to be announced by the Nobel committees. A British researcher who discovered genetic fingerprinting that has helped solve crimes and settle paternity disputes is another possible winner of the US$1.54 million (EUR 1.09 million) medicine prize.

The secretive Nobel committee at Stockholm's Karolinska Institute will announce the winner after a final vote Monday morning, but won't even say who's on the short list before then.

"We have been working on this since February," said Hans Jornvall, secretary of the Nobel committee that reviews research nominated for the award.

Their work set the stage for research suggesting that cancer cells use telomerase to sustain their uncontrolled growth. Scientists are studying whether drugs that block the enzyme can fight the disease. In addition, scientists believe that the DNA erosion the enzyme repairs might play a role in age-related illnesses.

Sir Alec Jeffreys of the University of Leicester also is often mentioned by experts as a possible candidate. Jeffreys found in 1984 that a DNA sample could be linked to the person it came from - a finding that has come into play in court cases in which DNA evidence has exonerated convicted murderers.

It has also been used to help identify the victims of mass disasters, such as the Sept. 11, 2001, terror attacks in New York and Washington.

Karin Bojs, science editor at the Swedish newspaper Dagens Nyheter - who correctly guessed two of last year's Nobel Prizes - predicted that the medicine award would go to American David Julius and Israeli Baruch Minke for research on how the human body reacts to heat and pain.

Thomson Scientific, a unit of the U.S.-based Thomson Corp., singled out five possible candidates, including neuroscientist Fred H. Gage, who discovered that humans can develop new brain cells as adults.

Alfred Nobel, the Swedish inventor of dynamite, established the prizes in his will in the categories of medicine, physics, chemistry, literature and peace. The economics prize is technically not a Nobel but a 1968 creation of Sweden's central bank.

The prizes are handed out every year on Dec. 10, the anniversary of Nobel's death in 1896.

Nobel left few instructions on how to select winners, only that the prizes should honor those who "shall have conferred the greatest benefit on mankind."

Jornvall said medicine winners must have made an important discovery - they are not awarded for a body of research.

"If it's not possible to define what the discovery is, then it's going to be hard," he said.