Obese women can gain no weight during pregnancy without harming baby: new study

Researchers studying obese women can gain little or no weight during pregnancy - and even lose a few pounds - without harming their babies. 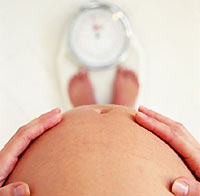 Obese women can gain no weight during pregnancy without harming baby: new study

Obese mothers who put on less than the recommended 15 pounds (7 kilograms) were less likely to develop pregnancy-related high blood pressure or deliver by Caesarean section and more likely to have a normal-weight baby, the study showed.

The findings, in the October issue of Obstetrics & Gynecology, fuel growing concern that U.S. weight-gain guidelines for pregnant women are outdated and do not take into account America's obesity epidemic.

The Institute of Medicine, which issued the weight guidelines in 1990, is about to consider changing them. The private organization advises the federal government.

Dr. Raul Artal, one of the study's authors, said the fear has been that not gaining weight would hurt the fetus.

"Not only were there no deleterious effects, but there are benefits," said Artal of Saint Louis University School of Medicine, who supports changing the weight guidelines.

In an accompanying editorial, Dr. Patrick Catalano of Case Western Reserve University noted that the current guidelines were written when the concern was low birth weights. Now it has shifted to rising obesity, he said.

Artal said pregnancy is one of the main causes of obesity in women.

Using information from birth certificates, the study analyzed the pregnancies of more than 120,000 obese women from Missouri to see how weight gain affected their blood pressure, C-sections and the baby's birth weight. Obesity increases a woman's risk of miscarriage and other serious complications such as gestational diabetes.

The study found that 23 percent of the obese women gained less than 15 pounds, 31 percent gained 15 to 25 pounds (11 kilograms) and nearly half gained more than 25 pounds. Those who gained less had better outcomes.

The researchers considered three levels of obesity based on body mass index, or BMI, and came up with optimal ranges of weight gain. For a BMI of 30-34.9, the best outcomes came with a weight gain of 10 to 25 pounds; gaining less than 9 pounds (4 kilograms) was best for a BMI of 35-39.9 and losing up to 9 pounds was best for those with a BMI over 40.

The study's strengths are its size - drawing from an entire state - and that it is the first to look at different levels of obesity, "not a lumping of all obese women together," said Dr. Emily Oken, a Harvard Medical School professor and researcher on obesity, nutrition and weight gain in pregnancy.

Catalano said that because almost half of pregnant women gain more than the recommended amount of weight, encouraging them to stay within the current guidelines is a significant challenge. But Artal said he has found women are more likely to modify their behavior during pregnancy because of concern for their child.

Catalona suggested advising pregnant women to eat a balanced diet low in sugars and saturated fats and to get moderate exercise, like walking or swimming. He also recommended referring obese women to a nutritionist and urging patients to lose weight after they give birth to avoid problems in future pregnancies.