NASA's rover Opportunity has made the first stop inside a huge Martian crater and is ready to carry out the first science experiments. 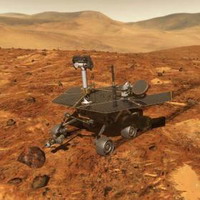 Ground controllers planned to send commands late in the day to the six-wheel robot to examine bright rock layers arranged like a bathtub ring within Victoria Crater. Results on how the rover fared were expected Friday, said John Callas, the rover project manager at NASA's Jet Propulsion Laboratory in Pasadena, California.

Mission managers wanted to delay the science operations because of a power outage at one of the international network of antennas that communicates with interplanetary spacecraft. But they changed their minds after they secured another antenna.

Opportunity rolled to the crater lip last month and began a calculated descent down the inner wall toward a shiny band of bedrock that scientists believe may be part of an ancient Martian surface. After a series of three drives, the rover parked itself 40 feet (12.2 meters) below the rim at a 25-degree tilt - the steepest angle it has encountered since landing on the planet.

Opportunity's first task will be to use the tools on its robotic arm to touch and drill into the rock slab. Mission scientists expect it to stay in place for at least a week before scaling farther down the crater to sample other rocks.

"We're going to take our time collecting the data," principal investigator Steve Squyres of Cornell University said in an e-mail. "We invested way too much effort in getting here to blow it by being hasty."

Opportunity and its twin Spirit have outlasted their original, three-month mission since parachuting to opposite sides of Mars in 2004. The solar-powered rovers recently survived a raging dust storm that forced them to go into sleep mode to conserve energy.

Spirit is currently exploring a plateau called Home Plate for evidence of volcanism. Though Martian winter is still seven months away, mission managers have started looking for a safe spot for Spirit to retreat to.