Scientists tried to find out how space travel affects germs and put some carefully wrapped Salmonella aboard a space shuttle in September 2006. 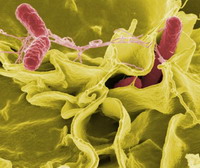 The result: Mice fed the space germs were three times more likely to get sick and died quicker than others fed identical germs that had remained behind on Earth.

"Wherever humans go, microbes go, you can't sterilize humans. Wherever we go, under the oceans or orbiting the earth, the microbes go with us, and it's important that we understand ... how they're going to change," explained Cheryl Nickerson, an associate professor at the Center for Infectious Diseases and Vaccinology at Arizona State University.

Nickerson added, in a telephone interview, that learning more about changes in germs has the potential to lead to novel new countermeasures for infectious disease.

She reports the results of the salmonella study in Tuesday's edition of Proceedings of the National Academy of Sciences.

The researchers placed identical strains of salmonella in containers and sent one into space aboard the shuttle, while the second was kept on Earth, under similar temperature conditions to the one in space.

After the shuttle returned, mice were given varying oral doses of the salmonella and then were watched.

The researchers found 167 genes had changed in the salmonella that went to space.

"That's the 64 million dollar question," Nickerson said. "We do not know with 100 percent certainty what the mechanism is of space flight that's inducing these changes."

However, they think it's a force called fluid shear.

"There are areas in the body which are low shear, such as the gastrointestinal tract, where, obviously, salmonella finds itself," she went on. "So, it's clear this is an environment not just relevant to space flight, but to conditions here on Earth, including in the infected host."

She said it is an example of a response to a changed environment.

"These bugs can sense where they are by changes in their environment. The minute they sense a different environment, they change their genetic machinery so they can survive," she said.