The surgery lasted five hours and the baby boys, who were joined at the stomach, were doing well. 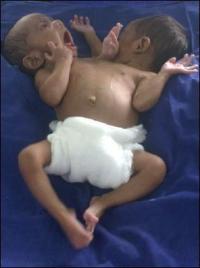 "All the health parameters are O.K. We see a good chance of their survival," said Sharma, who headed the team of surgeons.

But he said the next 48 hours were critical for the boys.

During the surgery, the liver, pancreas and the sternum (breastbone) of the boys were separated without any complications, Sharma said.

The surgery was done in Raipur, the capital of central Indian state of Chattisgarh.

The babies shared a common liver and pancreas along with some other body parts, but their hearts and urinary organs were separate, PTI quoted M. P. Pujhari, the hospital deputy superintendent, as saying.

The parents of the boys, Ram and Lakshman, are poor farm laborers in a village in Chhattisgarh state.

PTI said Tuesday's was the fourth surgery of its kind performed in India.