U.S. astronaut readjusts to life on Earth after 215 days in space

Astronaut Michael Lopez-Alegria is paying for his U.S. record of 215 continuous days in space. 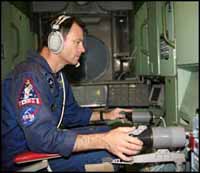 U.S. astronaut readjusts to life on Earth after 215 days in space

It has been almost a month since Lopez-Alegria returned from the international space station, but he walks a little funny because his body's balance system is still readjusting to gravity. He is getting used to his weight and having to haul himself out of a chair, for example, instead of floating around. For a while, everything felt heavy to him.

But that is not the hardest part of the transition, Lopez-Alegria told The Associated Press on Thursday.

But the spaceflight veteran is quick to say that experiencing disparate realities "is not a bad thing."

"It's just the way it is," Lopez-Alegria said. "The transition just takes some time."

While in the cosmos, the astronaut who was born in Madrid, Spain, went on three spacewalks to upgrade the space station's cooling system and do maintenance on the orbiting outpost. Lopez-Alegria also worked on various scientific experiments.