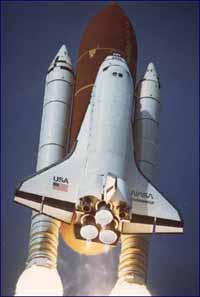 NASA said it was not immediately known whether the equipment was damaged. But space agency spokesman Allard Beutel in Washington said Wednesday that the accident should not delay any shuttle launches.

The trestle collapse was under investigation.

The shuttle's twin boosters are 150 feet (45 meters) tall and consist of four propellant segments each. They are used during liftoff and the first two minutes or so of flight to help the spacecraft break free of Earth's orbit, and are then jettisoned into the sea, after which they are recovered, refurbished and reused.

It was a leak of burning gas between two segments of a solid booster rocket that caused the Challenger explosion that killed seven astronauts in 1986.

"It appears when the train got onto the trestle, the trestle just gave way and sank to the ground," said Mike Rudolphi, an official with the boosters' manufacturer who went to the wreck site. "It's going to be a challenge to get it out of there."

Eight booster segments were on the train, which carried only the shuttle shipment, Rudolphi said. One booster overturned, along with two locomotives and a car carrying six attendants, who were injured.

Two of the injured were airlifted to a hospital in Tuscaloosa, where one was listed as critical and one fair.

The booster segments will probably be sent back to the manufacturer's Utah plant to be examined, Rudolphi said.

NASA spokesman Kyle Herring said the segments were not scheduled for use during the next shuttle flight, the liftoff of Atlantis on June 8, but for missions in October and December. NASA's solid rocket boosters and their parts are freely interchangeable.

The Alabama Emergency Management Agency said the four derailed train cars landed on their side on the ground in the woods next to the tracks, none of the cargo spilled, and there appeared to be no fire. Twelve rail cars remained upright.

The derailment was in a remote stretch of track near Myrtlewood, about 110 miles (177 kilometers) southwest of Birmingham.

Meridian and Bigbee of Meridian, Mississippi, was hauling the equipment and owns the trestle, said Mike Williams, a spokesman for Bigbee parent Genesee & Wyoming Inc. of Greenwich, Conn. The bridge was closed for repairs Sunday night and reopened Wednesday morning, he said.

He said that he was unsure of the nature of the repairs but that the bridge was inspected.

NASA officials said two locomotives, a train car behind them, and one car with a shuttle booster overturned. The fuel in the rocket, aluminum perchlorate, has the consistency of a rubber eraser and there was no danger of it igniting, according to NASA.

A spokesman for the manufacturer, Bryce Hallowell, said the train was taking the same route to the Kennedy Space Center that has been used for 30 years or more. The train trip can take more than a week.

The accident was the latest in a run of bad luck for the space agency.

In February, astronaut Lisa Nowak was arrested on charges of trying to kidnap a romantic rival. Later that month, a freak hail storm caused thousands of dents in space shuttle Atlantis' external tank as it sat on the launch pad, delaying the flight for months.

Last month, a worker at NASA's Johnson Space Center in Houston shot a colleague to death and then killed himself.