Bones of camel estimated to be about 10,000 years old found near Mesa, Arizona

Workers digging at the future site of a Wal-Mart store in suburban Mesa have unearthed the bones of a prehistoric camel that is estimated to be about 10,000 years old. 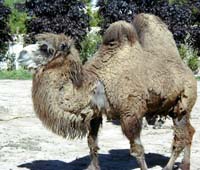 Bones of camel estimated to be about 10,000 years old found near Mesa, Arizona

Arizona State University geology museum curator Brad Archer hurried out to the site Friday when he got the news that the owner of a nursery was carefully excavating bones found at the bottom of a hole being dug for a new ornamental citrus tree.

"There's no question that this is a camel; these creatures walked the land here until about 8,000 years ago, when the same event that wiped out a great deal of mammal life took place," Archer told The Arizona Republic.

Wal-Mart officials and Greenfield Citrus Nursery owner John Babiarz have already agreed that the bones will go directly on display at ASU.

Archer said some of them may be placed on display very soon, but most will take several months "to get sorted out and stabilized."

"In my 15 years at ASU doing this work I can think of six or seven times when finds this important have been made," Archer said. "This is the first camel. Others have been horses, once a mammoth on Happy Valley Road. This sort of thing is extremely rare."