Logging and palm oil ventures are coming too close for the comfort of river-dwelling crocodiles on Borneo island, possibly resulting in more attacks on humans. 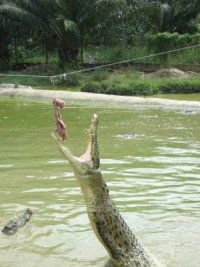 Alexander Sayok, a scientist in charge of the U.N. Development Program's forest management project in Malaysia's Sarawak state in Borneo, said he has noticed increasing reports of crocodile attacks since early 2006, raising fears that the reptiles are becoming more violent.

"The habitat of the crocodiles has been threatened because land development activities for logging and palm oil are being taken right to the river banks," Sayok told The Associated Press. "There are fewer areas left now for the crocodiles to roam, bask or hide from humans."

Crocodiles are common in Sarawak's long, winding rivers, and they are protected under Malaysian wildlife laws, which outlaw them being hunted or killed.

In previous years, attacks on humans averaged about one every four months. However, two crocodile attacks have been recorded in separate districts this month alone.

A timber worker was reportedly snatched and killed on April 18 while he was bathing near a logging camp, while a villager had his hip bitten while paddling a boat early this month.

Crocodiles generally do not attack people unless they are disturbed or hungry, Sayok said. He noted that development has jeopardized their food sources, with monkeys and deer dwindling because of deforestation and fish being killed by water pollution.

Sayok did not have statistics for crocodile attacks, and Sarawak Forestry Corporation officials said they could not immediately provide figures or comment.

Sayok added that there were many crocodiles in the Loagan Bunut National Park in Sarawak, but no attacks on people have been reported there, probably because curbs on development have ensured the crocodiles have sufficient fish and breeding grounds.