Europe could face a major health and social crisis as obesity levels continue to rise among adults and children. 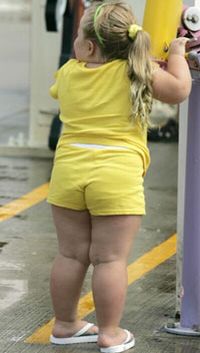 Doctors at the 15th European Congress on Obesity said health officials across the continent needed to use a new approach and end discrimination in dealing with obese people.

"Obesity should be treated within the health care system as any other complex disease," said Prof. Vojtech Hainer, president of the European Association for the Study of Obesity. "In many European countries, more than half the population is overweight or obese."

While the availability of data within the European Union varies widely, surveys presented at the congress showed that England, Germany, Greece, Cyprus, the Czech Republic and Slovakia had some of the highest rates of overweight or obese adults.

According to a survey completed in 2003, 75.4 percent of German men and 58.9 percent of women were overweight or obese.

The body mass index ratio or BMI is used to determine whether someone is overweight or obese. A normal range is 18.5 to 24.9. Overweight is 25 to 29.9 and more than 30 is considered obese.

To determine BMI, a person's weight in kilograms is divided by their height in meters squared.

Spain had the highest rate of overweight boys, with 35 percent in that category in 2000-2002. Other countries with high rates between 29 and 31 percent were Malta, Scotland, Greece, Portugal and England.

Portugal had the highest rate for girls, at 34.3 percent, followed by Scotland (32.9 percent) and Spain (32 percent).

Holland, Slovakia, Estonia and Finland were among the countries with the lowest rates of overweight children.

Fried said the high childhood obesity rates could lead to a crisis in the labor force of some EU countries.

"If the trend continues, who is going to work within 10 years in countries where obesity is on the rise?" Fried said. "This is going to be a disaster when they reach working age."