Flu vaccine manufacturers expect to have a record 132 million doses ready for the 2007-2008 flu season. 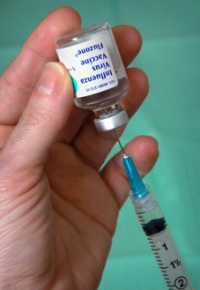 CSL Biotherapies, and Australian company, applied last month for federal approval to sell its inactivated flu vaccine in the United States this fall.

The vaccine estimates were announced at an Atlanta meeting of flu vaccine manufacturers, health care providers and public health officials.

If approved, CSL would join four other companies providing flu vaccine in the United States. Three make flu shots  Sanofi Pasteur Inc., which projects 50 million doses; Novartis Vaccines, which expects to make up to 40 million doses; and GlaxoSmithKline, which is planning 30 million to 35 million doses.

In addition, MedImmune Vaccines Inc. plans to manufacture about 7 million doses of FluMist, a nasal mist recommended only for healthy people between 5 and 49. It contains live virus and carries a slight chance of causing flu symptoms.