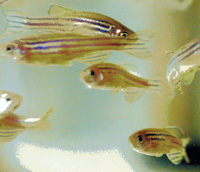 Michael Smith, an assistant biology professor at Western Kentucky University, cited U.S. Navy sonar and oceanic shipping as possible noise pollution for fish, which use sound to find their way around and listen for predators.

Then tests will see whether the fish have hearing loss. The fish's brain waves will be recorded through electrodes while the fish listen to tones.

"We give a series of pure tones to fish through an underwater speaker, and we increase the intensity of the tones until we detect brain-wave activity," Smith said.