Companies that make kids' products will face tougher U.S. government scrutiny to keep out any lead that could do children harm. 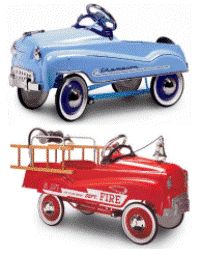 The Environmental Protection Agency agreed in response to legal pressure to write up to 120 importing and manufacturing companies by the end of the month, instructing them to provide health and safety studies if any lead might be found in the products they make for children.

"Parents still need to be vigilant about the recalls on products marketed to children that might contain lead, and take those products away from children as soon as they are recalled," Jessica Frohman, co-chair of the Sierra Club's national toxics committee, said Sunday.

The EPA letters are part of a settlement it signed Friday with the Sierra Club and another advocacy group, Improving Kids' Environment. The agency also must tell the Consumer Product Safety Commission "that information EPA has reviewed raises questions about the adequacy of quality control measures by companies importing and/or distributing children's jewelry."

While the EPA can ban a substance such as lead, only the commission has the authority to ban a product. The Sierra Club last year petitioned EPA and the commission to monitor and ban the making of any children's necklaces, bracelets, rings and other jewelry that contains lead.

After the EPA rejected the petition, the two groups sued the EPA last year in the U.S. District Court for the Northern District of California, where the Sierra Club is headquartered.

The lawsuit also followed the death of 4-year-old Jarnell Brown of Minneapolis, who died last year from acute lead poisoning by swallowing part of a heart-shaped charm bracelet distributed by Reebok International Ltd. The child's death was ruled accidental, but Reebok recalled 300,000 of the silver-colored, Chinese-made bracelets found to be 90 percent lead that the company had given away with its shoes.

The attorneys general in California and Illinois sent letters to EPA supporting the groups' legal challenge.

In December, the commission began taking steps to ban, rather than recall as it has been doing, children's jewelry containing more than 0.06 percent lead by weight. California and Chicago have adopted the same standard.

The commission's decision came after it had recalled more than a dozen products in the past two years out of concerns about lead. Nationally, inexpensive toy jewelry made with lead or painted with lead paint is sold in vending machines and stores that sell mainly to immigrant communities.

More than 70 major U.S. retailers agreed last year to stop selling children's jewelry containing lead in California after another advocacy group, the Center for Environmental Health, and the state's attorney general sued in 2004.

The commission's biggest-ever recall was in 2004 and involved 150 million pieces of children's jewelry with unsafe lead levels.