The waterways around New York City are not exactly what spring to mind at the mention of an environmentally friendly location. 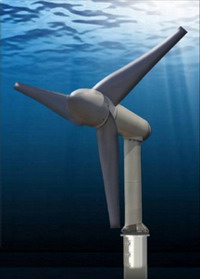 Cesspool, perhaps. Or rumored resting place of countless mobsters. But not a green zone.

The state thinks otherwise. New York and a Virginia-based company have partnered to use the East River as the staging ground for a unique experiment in renewable energy. They are placing six windmills underwater on the east side of Roosevelt Island to harness kinetic energy in the tides to produce electricity - without having to dam the water.

As the river's current rotates the giant turbines, the energy is converted into electricity that is powering a grocery store and a garage on Roosevelt Island. One of the turbines is already in operation, and five more are being installed in the next two weeks as part of the $7 million (5.17 million EUR) project.

"We're looking for the most cost-effective way to get the most energy out of moving water while having a positive impact on the environment," said Verdant Power President Trey Taylor.

The technology is based on the same principles of hydropower and wind power. Wind energy uses turbines that harness drafts of air which is converted to power, and dams use the kinetic energy in moving water. The East River turbines resemble windmills, but were specially crafted to move with river currents.

Project organizers say it's the first time the concept has been used in the U.S.

Taylor started work on the effort about eight years ago, and is in a final, 18-month testing phase. The regulations governing such projects here are stringent, but Taylor hopes that will show the project can succeed anywhere.

"We picked New York on purpose, because the regulations are so strict, and also because the East River is a tidal strait, there is a high current," Taylor said.

One downside to the technology is that there is not always a current, so on average, the turbines rotate enough to generate electricity about 77 percent of the time. At full capacity, the 10-megawatt project could power as much as 10,000 homes.

It may not seem like much, but it's a step in the right direction, environmentalists say. The U.S. gets most its power from coal-fired plants, then natural gas and hydropower. Offshore wind farms have been growing in popularity around the country, but they frequently run into opposition.

"The biggest source of power is burning oil, coal and all of that," Taylor said. "That contributes to greenhouse gases, and in a city where this many people live, the idea of having a clean energy source is a real appeal."

New York City released a report this week saying that it produces nearly 1 percent of the nation's greenhouse gas emissions.

Naturally there are environmental concerns with the project, chiefly, sediment changes and damage to fish populations. The river is not quite the cesspool it was 30 years ago, and is home to striped bass, herring, smelt and sturgeon. Many fish species travel between the ocean and the river, and if the turbines alter the behavior, it could dramatically affect fisheries.

Taylor said the fish near the turbines are being monitored using sonar equipment, and the river bottom is mostly bedrock, so no sediment is being kicked up by the rotation. Commercial boats do not use that section of the river, so the shipping industry is not affected by the project.

Environmental groups would like to see a year's worth of data before deciding whether the turbines have any significant effects on the water, but so far, they are pleased.

"The idea that it is renewable energy is a really good thing," said Robert Goldstein, an attorney for the environmental group Riverkeeper. "They seem to be acting very careful, and moving forward in a responsible way."

The New York State Energy Research and Development Authority has funded nearly $2 million (1.48 million EUR) to help with the cost of design and environmental testing, and has high hopes for the project.

"We've had some blade failures, but we've already gotten back some great test results," said Ray Hull, spokesman for authority. "This could be a significant advance in renewable energy."

Hull said the economics are hard to ignore, too.

"During high tide periods in July and August, when there is such a demand for power, this could be pretty good stuff, financially speaking."

If more power is available, there's a lower chance of suffering through another summer of disastrous blackouts. A 2006 blackout in Queens affected more than 100,000 people and Con Edison has been under pressure to come up with a plan to avoid similar problems.

Taylor is thinking bigger. He eventually hopes to outsource manufacturing to assembly plants, and form joint partnerships with city energy suppliers, like Keyspan. He wants to place the technology in U.S. rivers like the St. Lawrence or Mississippi, and around the world.

"There are so many people that don't have access to electricity around the world," he said. "But many live near running water."