One of the world's rarest rabbits was spotted in Indonesia for just the third time in the past 35 years, underscoring the importance of conserving the region's threatened rain forests, a conservation group said Thursday. 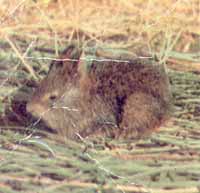 The rare species of rabbit was last photographed in 2000, and the last sighting by a scientist was in 1972.

"This rabbit is so poorly known that any proof of its continued existence at all is great news, and confirms the conservation importance of Sumatra's forests," Colin Poole, director of the Wildlife Conservation Society's Asia Program, said in a statement.

The rabbit is only known to exist in the forests of Sumatra, and thought to be the only representative of its genus.

It is listed as critically endangered by the World Conservation Union, meaning it faces a high risk of extinction from a range of threats, including the loss of habitat to farming.

In 1999, researchers discovered another striped rabbit in the Annamite Mountains that straddle Laos and Vietnam. Although both seem similar in appearance, genetic samples revealed the Sumatran and Annamite striped rabbits were separate - though closely related - species.

According to the findings, both species have been diverging for about 8 million years.