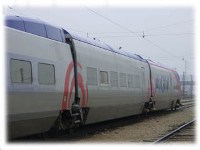 The black and chrome train with three double-decker cars, named the V150, bettered the previous record of 515.3 (320.2 mph), set in 1990 by another French train. However, it fell short of the ultimate record set by Japan's non-conventional magnetically levitated train, which sped to 581 kph (361 mph) in 2003.

Tuesday's endeavor, some 200 kilometers (125 miles) east of the capital on a new track linking Paris with Strasbourg, showcased technology France is trying to sell to multibillion dollar overseas markets like China.

Sparks flew from the power lines overhead and a long tail of dust kicked up behind the train as it whizzed through the French countryside.

The train sped along far faster than a passenger jet taking off or a Formula One race car. On board, the sensation was comparable to that of an airplane at liftoff. The train kept up with planes flying overhead taking photos.

People lined bridges clapping and cheering as the train zipped underneath them.

"There are about 10,000 engineers who would want to be in my place," train driver Eric Pieczac said. "It makes me very happy, a mixed feeling of pride and honor to be able to reach this speed."

Technicians on the train had "French excellence" emblazoned on the backs of their T-shirts. Some applauded when the top speed was attained. The train also carried journalists.

On board, there were noticeable vibrations as the train hurtled along. The air pressure briefly caused a slight earache. Journalists were not buckled into their seats, but were told not to move around or stand up, so as not to interfere with live television broadcasts from the train.

Outside, the countryside zipped past too fast to appreciate. After setting the record, the train gradually slowed. By comparison to its top speed, its cruising speed of around 300 kph (190 mph) felt snail-paced.

Philippe Mellier, president of Alstom Transports, the builder, said before the test that the train would try to outdo the absolute world record held by the Japanese for their magnetically levitated Maglev train. But, in the end, the TGV came up just short.

Pierre-Louis Rochet, former head of French state-run rail network SNCF's international division, said this may be as fast as it gets on standard rails.

"There is no interest" in going faster, said Rochet, now rail director for international engineering firm Arcadis. The speed test was aimed at boosting cruising speeds for commercial trains, which he predicted would never run at more than 350kph (220mph), "because after that the costs will increase too much."

The French "train a grande vitesse," or TGV, was made up of three double-decker cars between two engines, and dubbed V150.

It was equipped with larger wheels than the usual TGV to cover more ground with each rotation and a stronger, 25,000-horsepower engine, said Alain Cuccaroni, in charge of the technical aspects of testing.

Adjustments also were made to the new track, which opens June 10, notably the banking on turns. Rails were also treated for perfect contact, Cuccaroni said. The electrical tension in the overhead cable was beefed up, from 25,000 volts to 31,000.

It was the first time that double-decker cars were used at such a high speed, according to officials of Alstom, which makes TGVs and which crawled back a year ago from the edge of bankruptcy.

The cars were transformed into a laboratory for the event so that technicians from SNCF and Alstom could gather data.

That information should help improve future TGVs, but the goal of the operation was also aimed at showcasing French technology as Alstom tries to seduce overseas markets.

France competes with neighboring Germany and with Japan for contracts. Transport Minister Dominique Perben received a California delegation hours before Tuesday's record attempt. California is studying prospects for a high-speed line running from Sacramento in the north to San Diego, in the south, via San Francisco and Los Angeles.

China, the biggest potential market, was to start building a high-speed line this year between Beijing and Shanghai to cut travel time from nine hours to five.

The speaker of the California state assembly, Fabian Nunez, was meeting rail officials in France this week as his state looks to introduce a high-speed train connecting its major cities.

President Jacques Chirac celebrated the record as "a magnificent demonstration of France's formidable capacities in research and innovation." In a statement, he also hailed the TGV as "an essential asset to meet the challenge of sustainable development in transport."