If the sky is clear on Saturday night the first total eclipse of the Moon for three years should be visible. 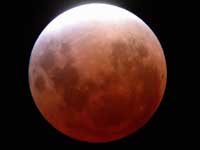 The Moon will appear a shade of brown, coppery-red or orange, an effect that will be visible from all continents.

During the period of totality, from 10.24pm to 11.58pm , the Moon will only be illuminated by light filtered through the Earth's atmosphere, reports Telegraph.

According to Baltimore Sun, that first-ever "World Series Eclipse" was Oct. 27, 2004 , and it was under way as the Sox completed their four-game sweep of the Cardinals in St. Louis.

At sunset tomorrow, if the weather cooperates, we'll see another one, as the full March "Sap Moon" or "Crow Moon" rises over the eastern horizon about 6 p.m. It will already be in full eclipse - deep inside the northern half of the circular shadow Earth casts into space.