New computerized casts of abnormally small Homo sapiens brains are reigniting the debate over the skeletal remains nicknamed "The Hobbit." 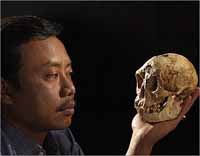 Ever since the 18,000-year-old remains of the three-foot-tall adult female hominid were unearthed in 2003 on the remote Indonesian island of Flores , scientists have argued whether the specimen was a human with an abnormally small head - or part of a new species in the human family tree.

According to Malaysia Star, an international team led by Florida State University anthropologist Dean Falk compared the Hobbit's skull to those of nine people with microcephaly, a rare condition in which the head is abnormally small due to improper brain development. They concluded the 3-foot-tall adult woman had a highly evolved brain, unlike that of a microcephalic person, confirming she belongs to the proposed extinct species Homo floresiensis, closely related to modern Homo sapiens.

"Lo and behold, it doesn't look anything like a microcephalic. In fact, it's antithetical," Falk said in an interview, rebutting scientists like primatologist Robert Martin of the Field Museum in Chicago who suggest the skull came from a person with microcephaly.

A previous study by Falk had been criticized because it compared the Hobbit, with a brain a third the size of modern people, to just a single microcephalic skull.