The discovery of fossilized remains of a mouse-like animal that lived at least 16 million years ago is the first hard evidence that New Zealand had its own indigenous land mammals, a researcher said Thursday. 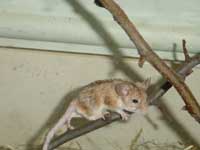 New Zealand paleontologist Trevor Worthy and his team say they discovered two parts of a jaw and a femur (thighbone) about the size of a fingernail during digs in New Zealand's Central Otago region from 2002 until 2004. Their findings were published in the Proceedings of the National Academy of Sciences this week.

Worthy said the creature probably looked like a "little rat," weighing around 100 grams (3.5 ounces) and measuring about 10 centimeters (4 inches) with a pointy snout.

Until now, the only fossils discovered in New Zealand were those of flying mammals like bats as well as birds and marine mammals, Worthy said, adding that his team had earlier discovered fossils from 24 bird species and a crocodile at the same hilly site in Central Otago that once was a huge lake.

"Scientists have long held the view that New Zealand has this weird and wonderful avian biota that lived on the ground because there were no mammals to impede or compete with birds," said Worthy, of the University of Adelaide in Australia.

"It appears that this little mouse-like animal was part of the fauna on the ancient Gondwana supercontinent and it got stuck on New Zealand when the latter separated more than 80 million years ago," he told The Associated Press.

About 100 million years ago, most land masses were part of a southern supercontinent called Gondwana which included Antarctica, South America, Africa, Madagascar, Australia-New Guinea, and New Zealand. New Zealand is believed to have split from Gondwana about 82 million years ago and other continents soon followed.

Worthy who conducted the research with New Zealander Alan Tennyson and Australians Michael Archer among others also said the discovery cast doubt on theories that New Zealand was submerged from 25 million to 30 million years ago and later re-colonized by plant and animal species from nearby land masses like Australia.

But other paleontologists said there is not enough evidence to support Worthy's hypotheses, noting fossil fragments found so far are more like tantalizing clues than solid proof that this was a land-roaming mammal rather than a bat, reports AP.

"I think it's interesting but I think they need to find better stuff," said Tom Rich, the curator of vertebrae paleontology at the Museum Victoria in Melbourne. "What they have now is tantalizing but ... it is not definitive. If they had one tooth in that jaw, that would make a lot of difference. A tooth, in particular molar, would be decisive in determining whether you have a terrestrial mammal or a bat."

Worthy acknowledged more fossils must be found, but only to learn more about the land mammals' origins. His team will return to the Central Otago site from Jan. 6-16 for additional research.

"We'll get more bones with any kind of luck and we'll be able to improve our interpretation of its family tree," he said.