An international expedition to search for a rare Chinese river dolphin has ended without a single sighting, and researchers said Wednesday that the aquatic mammal is facing imminent extinction. 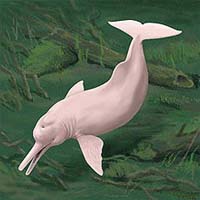 A few of the white Yangtze River dolphins, known as baiji, may still exist in the animal's native habitat, in the eastern part of the massive waterway that bisects China, but not in sufficient numbers to breed and ward off extinction, said August Pfluger, the Swiss co-leader of the expedition.

"We have to accept the fact that the baiji is functionally extinct. We lost the race," Pfluger said in a statement released by the expedition. "It is a tragedy, a loss not only for China, but for the entire world. We are all incredibly sad."

The baiji, shy and nearly blind, is one of the world's oldest dolphin species, dating back some 20 million years. Scientists believe their disappearance would be the first instance of a large aquatic mammal being driven to extinction since hunting killed off the Caribbean monk seal in the 1950s.

Overfishing and shipping traffic, whose engines interfere with the sonar the baiji uses to navigate and feed, are likely the main reasons for the mammal's declining numbers, Pfluger said. Though the Yangtze is polluted, water samples taken by the expedition every 50 kilometers (30 miles) did not show high concentrations of toxic substances, the statement said.

For nearly six weeks, Pfluger's team of 30 scientists scoured a heavily trafficked 1,700-kilometer (1,000-mile) stretch of the Yangtze, where the baiji once thrived. The expedition's two boats, equipped with high-tech binoculars and underwater microphones, trailed each other an hour apart without radio contact so that a sighting by one vessel would not prejudice the other.

Around 400 baiji were believed to be living in the Yangtze in the 1980s. The last full-fledged search, in 1997, yielded 13 confirmed sightings, and a fisherman claimed to have seen a baiji in 2004, Pfluger said in an earlier interview.

At least 20 to 25 baiji would now be needed to give the species a chance to survive, the group's statement said citing Wang Ding, a hydrobiologist and China's foremost campaigner for the baiji.

Pfluger, an economist by training who later worked for an environmental group, was a member of the 1997 expedition and recalls the excitement of seeing a baiji cavorting in the waters near Dongting Lake.

"It marked me," he said in an interview Monday. He went on to set up the baiji.org Foundation to save the dolphin, reports AP.

That goal having evaporated, Pfluger said his foundation would turn to teaching sustainable fishing practices and trying to save other freshwater dolphins. The expedition also surveyed one of those dwindling species, the Yangtze finless porpoise, finding fewer than 400 of them.

"The situation of the finless porpoise is just like that of the baiji 20 years ago," Wang, the Chinese scientist, said in the statement. "Their numbers are declining at an alarming rate. If we do not act soon they will become a second baiji."

Pfluger and an occasional online diary kept by expedition members traced a dispiriting situation, as day after day the team engaged in a fruitless search for the baiji.

"At first the atmosphere was 'Let's go. Let's go save this damn species,"' Pfluger said. "As the weeks went on we got more desperate and had to motivate each other."