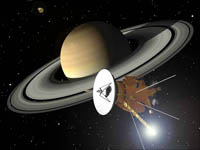 The mountains, which stretch for nearly 100 miles (161 kilometers), surprised researchers who re-analyzed the images to double-check that they were real and not shadows of other surface features.

Robert Brown, a Cassini scientist from the University of Arizona, said the mountains reminded him of California's Sierra Nevada range.

"You can call this the Titan Sierra," said Brown, who unveiled the new infrared images at an American Geophysical Union meeting in San Francisco.

The mountains are the tallest ever seen on Titan and probably formed from the same process that occurs in the Earth's mid-ocean ridge. Scientists speculated that hot material beneath Titan's surface gushed up when tectonic plates pulled apart, creating the mountain range.

Cassini found the summit of the range capped with brilliant white layers that are likely deposits of methane or another organic material, reports AP.

Cassini flew by Titan on Oct. 25 and snapped images of the mountains. It also found new evidence of sand dunes and a circular feature resembling the remnant of a volcano.

Launched in 1997, Cassini is funded by NASA and the European and Italian space agencies.