Astronauts completed a nearly seven-hour spacewalk, the first of three difficult forays outside during the shuttle Discovery's stay at the international space station. Later on Tuesday, NASA managers said the shuttle was safe to return to Earth. 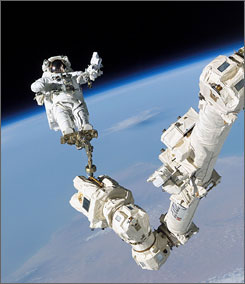 U.S. astronaut Robert Curbeam, a veteran spacewalker, and the European Space Agency's Christer Fuglesang, who was making his first spacewalk, installed an addition to the orbiting space lab. They stepped back inside the spacecraft at 10:07 p.m. (0307 GMT) after 6 hours and 36 minutes of toiling outside.

Just before doing that, though, the pair sent a cosmic shout-out.

"I just want to say congratulations to all the Nobel Prize winners this year and especially to John Mather from Goddard Space Center," Curbeam said of this year's physics honoree. "We're proud of you."

Mission Control astronaut Steve Robinson radioed back: "From here on the ground, we'd like to send our congratulations for a 100 percent successful first EVA," or extravehicular activity, the technical name for a spacewalk.

Curbeam and Fuglesang guided mission specialists Joan Higginbotham and Sunita "Suni" Williams as they used a robotic arm from inside the station to install a 2-ton, $11 million (Ђ8.31 million) addition along the space lab's truss in a space where clearance at times was less than 3 inches (7.6 centimeters).

"We don't want to scream over the loop," said Higginbotham, referring to the communications system that links the spacewalkers, Mission Control and the space station, after a difficult maneuver. "But we're very happy."

The spacewalkers, who are tethered at all times, later connected utility cables between the addition and an existing solar array; replaced a field camera outside the station; and moved a handle that was used to grip the new segment.

During one of the get-ahead tasks the spacewalkers were doing in their spare time, Fuglesang lost a 7.8-inch (20-centimeter), 0.9-pound (0.41-kilogram) extension to a pistol-grip power tool. NASA managers did not seem concerned about the loss, reports AP.

At a news briefing late Tuesday, John Shannon, chairman of the mission management team, said that experts looking at two dinged areas on the shuttle the left wing and belly decided the nicks were not of concern.

"The vehicle's extremely clean and we got all our areas cleared off," Shannon said. The shuttle's heat shield, he added, "is ready to come home."