The Argentine government confirmed on Wednesday that a daughter of U.S. President George W. Bush suffered a purse-snatching during a visit to the Argentine capital, despite the presence of Secret Service agents and local police. 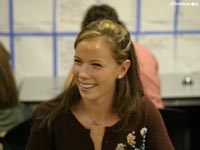 "The daughter of the president was on a tour in a typical tourist place, left her bag on the floor and it was stolen," Interior Minister Anibal Fernandez told reporters, confirming U.S. and Argentine media reports.

"There isn't much I want to say about this topic," he said.

Fernandez did not say which of Bush's twin daughters was robbed and said that the incident had not been reported to police.

ABC News, citing unidentified law enforcement reports, reported on its Web site Tuesday that Barbara Bush's purse and cell phone were taken while she was dining on a visit here.

La Nacion newspaper, citing anonymous government sources, reported on its front page Wednesday that one of Bush's daughters had her purse stolen Sunday in San Telmo, a cobblestone district of cafes, antique houses and steakhouses.

A pair of thieves removed the purse from under a table while Secret Service agents stood at a distance, La Nacion reported. The newspaper said its sources did not reveal which of the Bush daughters had her purse stolen.

Fernandez said the Argentine government had been informed about the visit of the Bush twins but had not reported it publicly.

"From now on, we are participating actively" in protecting the twins, who "have not yet left," he said. "I do not handle their agenda."

The U.S. Embassy in Buenos Aires said earlier it would not comment. In Washington, the White House, Secret Service and State Department also declined to comment, reports AP.

Tour guide Guillermina Cambiasso said she cautions tourists to guard their valuables and not carry passports on the streets. But like others, she asked: "How could this happen with the security she has?"