In the first comprehensive global study of sexual behavior, British researchers found that people aren't losing their virginity at ever younger ages, married people have the most sex, and there is no firm link between promiscuity and sexually transmitted diseases. 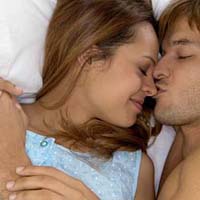 The study was published Wednesday as part of a series on sexual and reproductive health by the British medical journal, The Lancet. Professor Kaye Wellings of the London School of Hygiene and Tropical Medicines and her colleagues analyzed data from 59 countries worldwide.

Experts say data gleaned from the study will be useful not only in dispelling popular myths about sexual behavior, but in shaping policies that will help improve sexual health across the world. Researchers looked at previously published studies on sexual behaviour in the last decade. They also used data from national governments worldwide. Wellings noted that since the survey results were based on self-reporting, they could be susceptible to error.

Wellings said she was surprised by some of the survey's results.

"We did have some of our preconceptions dashed," she said, explaining that they had expected to find the most promiscuous behavior in regions like Africa with the highest rates of sexually transmitted diseases. That was not the case, as multiple partners were more commonly reported in industrialized countries where the incidence of such diseases was relatively low.

"There's a misperception that there's a great deal of promiscuity in Africa, which is one of the potential reasons for HIV/AIDS spreading so rapidly," said Dr. Paul van Look, director of Reproductive Health and Research at the World Health Organization, who was unconnected to the study. "But that view is not supported by the evidence."

Wellings says that implies that promiscuity may be less important than factors such as poverty and education especially in the encouragement of condom use in the transmission of sexually transmitted diseases. The survey found that single men and women in Africa were fairly sexually inactive: only two thirds of them reported recent sexual activity, compared with three quarters of their counterparts in developed countries, reports AP.

The study also found that contrary to popular belief, sexual activity is not starting any earlier than commonly believed. Nearly everywhere, men and women have their first sexual experiences in their late teens (aged 15-19 years), with generally younger ages for women than for men.

Still, there are considerable discrepancies across countries. In the United Kingdom, for example, men and women tend to lose their virginity at ages 16.5 and 17.5 respectively. In comparison, men and women in Indonesia waited until they were 24.5 and 18.5 respectively before crossing the sexual threshold.

Researchers also found that married people have the most sex, and that there has been a gradual shift to delay marriage, even in developing countries.

While that has meant a predictable rise in the rates of premarital sex, experts say this doesn't necessarily translate into more dangerous behavior.

In some instances, married women may be at more risk than single women.

"A single woman is more able to negotiate safe sex in certain circumstances than a married woman," says van Look, who points out that married women in Africa and Asia are often threatened by unfaithful husbands who frequent prostitutes.

There is much greater equality between women and men with regard to the number of sexual partners in rich countries than in poor countries, the study found. For example, men and women in Australia, Britain, France and the US tend to have an almost equal number of sexual partners. In contrast, in Cameroon, Haiti, and Kenya, men tend to have multiple partners while women tend only to have one. This imbalance has significant public health implications. "In countries where women are beholden to their male partners, they are likely not to have the power to request condom use, and they probably won't know about their husbands' transgressions," said Wellings.

Because of the diversity of sexual habits worldwide, Wellings warns that no single approach to sexual health will work everywhere. "There are very different economic, religious and social rules governing sexual conduct across the world," Wellings said.