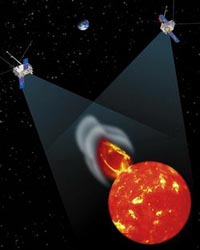 The Solar Terrestrial Relations Observatory, or STEREO, is designed to take three-dimensional pictures of the solar outbursts so scientists can, for the first time, pinpoint where the storms are heading.

The eruptions, called coronal mass ejections, can shut down communications and navigational satellites, affect aircraft near Earth's poles and zap electrical grids as billions of tons of charged particles are sent streaming into space, informs Reuters.

According to CNET News, s cientists believe that understanding solar storms will help them forecast weather in space and mitigate their negative effects on satellite operations, polar aviation, communication systems, power grids and astronauts in space.

The Stereo spacecraft made the trip aboard a Boeing Delta II rocket. Here, the rocket sits with its payload (the white nose of the ship) next to the launch gantry awaiting take-off from the Cape Canaveral Air Force Station in Florida.

"STEREO is another exciting mission for NASA to help them gain a better understanding of our universe," said Dan Collins, vice president and general manager, Boeing Launch Systems.

"Our Delta team takes tremendous pride in our work, and we are extremely pleased to help NASA reach its goals," he said.

STEREO's observatories are offset from one another in orbit.

This placement allows STEREO to obtain 3-D images of the Sun and trace the flow of energy and matter from the Sun to the Earth. This unique 3-D imagery will allow scientists to examine the structure of solar eruptions and learn more about their fundamental nature and origin.

The next Delta launch is DMSP F-17 for the U.S. Air Force aboard a Delta IV rocket planned for November from Vandenberg Air Force Base in California.