NASA postponed the launch of space shuttle Atlantis by another day after discovering a problem with a fuel cell early Wednesday. 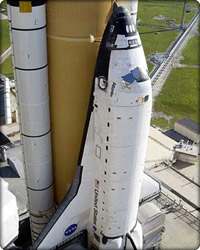 The fueling process had yet to start when one of three cells that provide electricity to Atlantis malfunctioned. The space agency planned to further examine the problem, and if possible try to launch at 12:03 p.m. EDT (1603 GMT) Thursday.

"The launch rules say you need to have three good, operating fuel cells," said NASA spokesman Bruce Buckingham. "We're going to see if it's something that's a real problem or whether it's something we can rectify."

The problem was discovered shortly before an overnight meeting to decide whether to start pumping the shuttle's fuel tank with supercold liquid hydrogen and liquid oxygen. When the shuttle's fuel cells were powered up, a low voltage reading came from one of the units, and the other two spiked up to compensate.

In 1995, space shuttle Endeavour's launch was delayed eight days so workers could remove and replace a bad fuel cell that was registering higher than allowable temperatures.

A 1997 flight of space shuttle Columbia returned to Earth four days after launch when a cell failed in orbit. The fuel cell had shown some erratic readings before the launch but the shuttle was cleared to fly. It was only the third time a shuttle mission had ended early, but the mission was rescheduled and Columbia launched again a few months later.

The delay puts more pressure on NASA to get Atlantis off the ground this week or postpone a daylight launch until most likely late October. A Russian mission to the space station is scheduled later this month.

NASA had scheduled launch attempts for Wednesday, Thursday and Friday. The weather forecast for all three days put the chance of weather prohibiting an attempt at 30 percent.

NASA almost didn't get a chance at all this week because of Tropical Storm Ernesto. Workers started moving the shuttle back to an assembly building last week because of the approaching storm, but NASA managers reversed course and decided to leave the spacecraft at the launch pad.

If the shuttle doesn't get into space this week, NASA is considering relaxing a rule that Atlantis be launched in daylight, which would allow the space agency to make another attempt at the end of September or early October. The daylight rule allows NASA to get clear photos during liftoff so engineers can spot any problems with foam falling from the external fuel tank, as happened in the 2003 Columbia disaster.

Atlantis, set for an 11-day construction mission to the international space station, will deliver a 35,000-pound (15,750-kilogram), $372 million (290.4 million euros) addition to the half-built space station. Three spacewalks are planned to resume construction on the orbiting lab, the first such work in 3 1/2 years after Columbia disintegrated while returning to Earth.

This mission is crucial to the space station's continued expansion and must be done before the final 14 shuttle flights.