Scientist says lots of dinosaurs remain to be discovered

Good news for dinosaur fans: There are probably a lot more of them waiting to be discovered. At least, their fossils are. 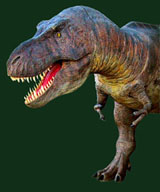 Scientist says lots of dinosaurs remain to be discovered

Peter Dodson of the University of Pennsylvania and Steve Wang of Swarthmore College estimate that 71 percent of all dinosaur genera groups of dinosaur species have yet to be discovered.

"It's a safe bet that a child born today could expect a very fruitful career in dinosaur paleontology," Dodson said in a statement.

The estimate appears in Tuesday's issue of Proceedings of the National Academy of Sciences.

Dodson a professor of anatomy in Penn's School of Veterinary Medicine and professor in Penn's Department of Earth and Environmental Sciences  first estimated the potential number of dinosaur genera in 1990 and now is revising that upward.

The estimates are based on the rates of discovery  about 10 to 20 annually and the recent increase in finds of fossils in China, Mongolia and South America.

Dodson suggests that 1,850 genera will eventually be discovered. So far 527 genera have been found.

Fossilization itself is a rare event, they note, and as many as half of the dinosaur genera that ever existed may have left no remains.

"I would never suggest that this prediction, however statistically sound, is the final word on dinosaur diversity," Dodson added. "My intention is to fuel the discussion using the facts at hand, and this is the best estimate we can make with the data available," reports AP.