What makes teens to be aggressive?

Watching wrestling on TV encourages aggressive behavior in teens when they date. And these violent tendencies are more pronounced in girls who watch wrestling. Those are the conclusions of a new study by Wake Forest University researchers, who reported their findings in the August issue of the journal Pediatrics, according to Forbes. 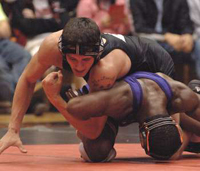 What makes teens to be aggressive?

The findings, which were conducted in 1999, and shared with other researchesr in 2001, are now being published in the journal Pediatrics this week.

Dr. Robert Durant, one of the study's authors, said the intensity of such behavior corresponded with the amount of exposure to wrestling, ABC News reports.

Questions included whether the students had recently fought with a boyfriend, girlfriend or date; whether they had been drinking or using drugs before a fight; and whether they had watched professional wrestling on television in the two weeks before each round of the survey.

Both DuRant and Thompson, who was not involved in the study, said the research should serve as a warning to parents. While parents can identify wrestling broadcasts as entertainment, children are less likely to place the shows in that context, according to the AP.

That's an idea rejected by Gary Davis, a spokesman for World Wrestling Entertainment.

While it's possible that teens already prone to violence happen to enjoy pro wrestling, DuRant said the consistent results over the survey's six- to seven-month span - which were adjusted for other variables such as school involvement - support the contention that there is a cause-and-effect relationship between viewing and problem behavior.

DuRant presented initial findings in 2001 at a meeting of the Pediatric Academic Societies, but the study published Monday is based on data that includes follow-up interviews with the surveyed teenagers.