Because of this, many premature infants end up on mechanical ventilation to assist their breathing. And two new studies suggest that adding nitric oxide to that ventilator therapy may reduce the risk of serious breathing problems and prevent brain injury in at least some premature infants, according to Forbes. 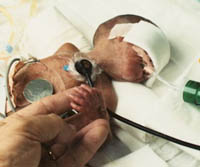 The findings, published in the New England Journal of Medicine, come from a study into nearly 600 premature babies on ventilators treated at 21 US medical centres. Described by British experts as "exciting", the study showed that babies treated with the gas were twice as likely not to get the disease, Guardian Unlimited reports.

Those benefits include reducing the risk of a common complication called bronchopulmonary dysplasia (BPD). This lung disease occurs when babies are on mechanical ventilators for long periods or are given high levels of extra oxygen. About 10,000 babies in the United States develop BPD each year. BPD increases the risk of long-term lung problems, high blood pressure in the lungs and neurodevelopmental disorders, such as cerebral palsy and learning problems, according to the National Institutes of Health.

Unfortunately, nitric oxide therapy doesn't appear to benefit all premature babies. That's why Dr. Ann Stark, chief of neonatology at Texas Children's Hospital, said more studies needed to be done before widespread use of nitric oxide in preemies begins. She said there are just too many unanswered questions regarding this therapy right now, Health Day News reports.