Searching DNA records has become a common practice in criminal investigations. Researchers now suggest this could be taken a step further by looking for close DNA matches that might lead police to a criminal through a relative. 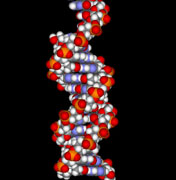 They note that 46 percent of jail inmates have at least one relative who has also been in prison.

But the idea also raises questions of privacy and other ethical and legal concerns.

Researchers led by Frederick R. Bieber of Harvard Medical School estimate that in a case where there is a 10 percent chance of finding a criminal through a DNA search, expanding the search to suspects' near relatives could raise the chances to 14 percent.

That could represent an increase of thousands of identifications in the United States, where there have been 30,000 identifications through DNA searches, the researchers said in a paper in Thursday's online edition of the journal Science.

They cite the case of a murder in Britain in which the search of that country's DNA database found a 14-year-old boy was a near match to DNA collected as evidence. That led police to the boy's uncle, who confessed to the crime.

In a similar North Carolina case, a search of the state's offender DNA database led to a near but not perfect match. When police followed up, the brother of the individual located through DNA confessed, the researchers reported.

But while there is potential for catching more criminals, the researchers stressed the need to address ethical issues.

The use of familial searching would effectively place a new category of people under lifetime surveillance, they noted.

"Kinship analysis, as with any investigative technique, may lead to the investigation of the innocent," co-author David Lazer of Harvard University said in a statement. "But it would also provide decisive leads in cases that would otherwise go unsolved."

Moses Schanfield, a professor of forensic science at George Washington University, said familial searching is a potentially useful tool, but added that he would expect only a small increase in the number of "hits," referring to finding people in a database.

It "will only be fully effective if every one in jail or charged with a felony has a DNA sample on file, so that your ascertainment is nearly complete. Until then it will be useful in a limited number of cases," said Schanfield, who was not a co-author of the paper.

In addition, he added, it raises privacy issues for relatives that are not involved in crime, but would be identified.

DNA is a two-edged sword, Bieber said in a telephone interview. In addition to finding more criminals, it also has exonerated more than 200 people since 1989, he said, reports AP.