The first U.S. vaccine against bird flu is only modestly effective, producing apparent protection in slightly over half the people who receive two mega-dose shots, initial testing shows. The worrisome findings underscore the urgency of brewing a better vaccine. 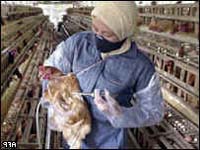 The U.S. government had signaled that this vaccine had serious flaws even as it ordered $162 million worth of shots last summer to stockpile in case the bird flu mutated to spread easily from person to person.

But results of the first human testing, published Wednesday in The New England Journal of Medicine, show the extent of the problem: The vaccine sparked a protective immune response in disappointingly few people 54 percent of those who got two shots, 28 days apart, of the highest dose.

Regular winter flu shots, in contrast, protect 75 percent to 90 percent of young healthy people, the same group that first tested the experimental bird-flu vaccine. The elderly typically fare worse; how they respond to the bird flu shots still is being analyzed.

The results weren't too surprising, said lead researcher Dr. John Treanor of the University of Rochester. Humans have never been exposed to the deadly bird-flu strain called H5N1, and it takes the immune system awhile to ramp up to fight unique types of influenza.

The good news: The vaccine seems safe even at doses 12 times stronger than are used in the regular winter flu shot. The main side effect was pain at the site of the injection.

Researchers are giving the study's 451 volunteers a third dose, to see if that spurs more protection. More promising are other studies under way that add immune-enhancing chemicals to the shots to try to boost their power, in hopes people could be protected with lower doses.

"We have a long way to go," acknowledged Dr. Anthony Fauci, infectious disease chief at the National Institutes of Health, which funded the research.

Indeed, because each shot requires such a high dose, the government's vaccine stockpile contains enough for just 4 million people, far below its initial goal of 20 million. Those shots would be reserved for health care providers and workers in flu vaccine factories if a human epidemic of H5N1 began any time soon, Fauci said, reports AP.