The bald eagle, the national bird depicted on the Great Seal of the United States carrying arrows and an olive branch, is a step closer to coming off the endangered species list. 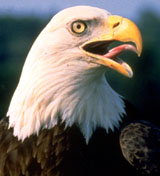 The Interior Department's Fish and Wildlife Service issued draft voluntary guidelines Monday that spell out how landowners, land managers and others should protect the bird once it no longer is safeguarded by the 1973 law. The majestic, white-headed eagle has been on the list for decades because of loss of habitat eating animal flesh that contained now-banned DDT pesticide.

The guidelines also proposed prohibitions on "disturbing" the bald eagle, which could include anything that would disrupt its breeding, feeding or sheltering or cause injury, death or nest abandonment.

The administration of former President Bill Clinton proposed removing the eagle from the endangered species list in 1999. The delisting has required far longer than the typical year, partly because updated counts are required from each of the states, some of which have their own rules that add to red tape, reports CNN.

Representatives of national environmental groups -- Defenders of Wildlife, National Wildlife Federation and Environmental Defense -- applauded the proposal to eliminate the eagle from the list, saying the population's rebound showed that the act is working.

"If the eagle has recovered to a stable population, then it's important to take it off the list so that other species that are in greater need can use the resources of the act to recover as well,'' said Cindy Hoffman, a spokeswoman for the Defenders of Wildlife in Washington, D.C.

But the groups cautioned that this week they will closely review how other existing laws will protect the eagle's habitat from logging and development, which has been a crucial benefit of the act.