The development of the Kamov Ka-102 multi-purpose high-speed helicopter with four rotors started in Russia in the 2000s. The helicopter has a length of 36 m and has a rotor diameter of over 18 meters. It also has the longitudinal design, two main rotors, and is also equipped with two smaller diameter rotors for a horizontal flight, like in turboprop aircraft. 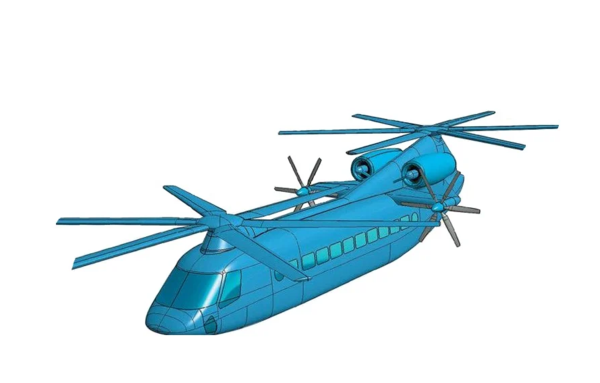 The power generated by two gas turbine power units is distributed between the rotors through gearboxes. The helicopter vaguely resembles the Soviet-era twin-rotor Yak-60, which, unlike the Ka-102, has no side rotors. With its own weight of 14.5 tons (excluding fuel), the helicopter can take on board 7 tons of additional payload or 90 people.

Thus, its take-off weight will be close to 30 tons. The Ka-102 will replace the Soviet Mi-6, which was decommissioned in 2004. The crew of the helicopter will consist of two people. The Ka-102 will be capable of flying at a speed of 500 km/h over distances of up to 1,100 kilometers; the flight altitude may exceed 4 kilometers.

Interestingly, there is only one competitor to the Russian helicopter in terms of speed - the experimental Eurocopter-X3. The European helicopter can develop the speed of 472 km/h, which at the moment is a world record, despite the fact that it is much lighter than the Ka-102 and belongs to a different class of cargo capacity. The Russian helicopter has a chance to steal the title of the world's fastest helicopter from its European competitor. A prototype of the Ka-102 is to go on its maiden flight already in 2020.