The development of the world's first-ever jet helicopter Kamov Ka-90 (also known as Ka-100) began in Russia in the early 2000s. The rotor will have a diameter of eight meters. With its own weight (together with fuel) of 7.5 tons, the helicopter can take four tons of cargo on board, or 24 passengers and two crew members. The new helicopter will thus replace the Mi-8 helicopter that gradually loses its relevance. 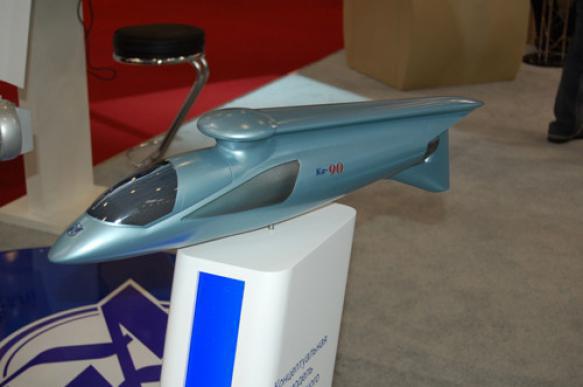 The super-fast Ka-90 will ensure a much more efficient delivery of cargo or military personnel in comparison with the Mi-8 that has a maximum speed of 250 km/h. The power unit of the vehicle can be used in two variations: the gas turbine engine for the rotor and the turbojet unit for horizontal flight, or one dual-circuit turbojet unit, which will rotate the rotor through the gearbox during takeoff.

The first option is much heavier, and it also takes more space, so engineers will most likely opt for the second configuration.

The Ka-90 takes off like a regular helicopter. When the vehicle gains required altitude, rotor blades form an arrow-shaped wing, and the helicopter starts flying as an airplane. In this form, the aircraft accelerates to 400 km/h. Afterwards, the blades fold completely backwards and the aircraft accelerates to 800 km/h. When landing, all actions are performed in the reverse order.

The model of the Ka-90 helicopter was first demonstrated in 2008 at HeliRussia exhibition in the Moscow region. The production of the new aircraft is set to begin in the next couple of years.