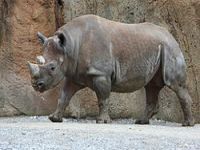 Two rhinoceros poachers were liquidated by the authorities in the Kruger National Park in South Africa. A detail of rangers encountered three poachers, who started shooting at them. Two were exterminated in the ensuing firefight while the third element escaped.

The bandits encountered in Kruger had equipment used for poaching and massacring the animals, including equipment to slice off the horn, which can earn 65.000 USD per kilogram.