The DNA testing of women of Ashkenazi Jewish ethnicity showed that they descend from an ancient population of Europe. Ashkenazi Jews make up about four-fifths of all Jews of the world and at least a half of the population of Israel. 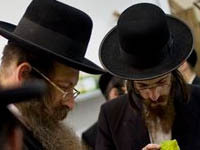 It is generally agreed that this sub-ethnic group was formed at the beginning of the first millennium in Central Europe and originates from the indigenous Jewish population in the Middle East. It was believed that these people came to Europe after the Romans destroyed the Second Temple and Jerusalem in 70 AD.

The study of mitochondrial DNA showed that more than 80 percent of women of Ashkenazi origin descend from the pre-biblical population of Western Europe, who lived about 7,500 years ago, and only a small portion can be really connected with the Middle East. According to scientists, in fact, Ashkenazi were migrating from the west to the east, under the pressure from non-Jewish population of Europe.