US scientist discovers another moon of Neptune 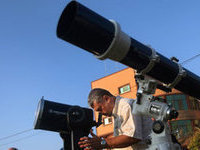 Thanks to archival photographs taken with the help of Hubble telescope, scientists found out that Neptune had 14, not 13 satellites, as was previously believed.

The new satellite was discovered by American scientist Mark Showalter of SETI non-profit research institute network that is engaged in the search for extraterrestrial life. The specialist studied more than 150 images taken by the telescope in 2004-2009 and concluded that the outermost planet of the solar system had another natural satellite. For the time being, the newly discovered celestial body was code-named S/2004 N1.

This satellite is located 105.2 thousand kilometers from Neptune, between the orbits of the planet's two other moons - Proteus and Larissa. The satellite makes one orbit around the planet in about 23 hours. This is the smallest moon of Neptune - it is only 19 kilometers in diameter.