Solar system has its own tail

Research officer of the Astronomical Institute named after Sternberg, Vladimir Surdin, shared his opinion with Pravda.Ru about the recent discovery of the tail of the solar system. 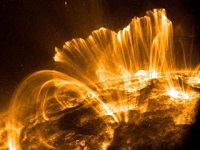 "It has long been known that the Sun constantly emits streams of hot gas. We call it the solar wind. This gas gathers speed and flies away from the sun. Our planet bathes in these hot streams of the solar wind. There are places where the solar gas comes into contact with interstellar gas that fills the space between all stars. Roughly speaking, this is the boundary of our solar system. The Earth and all planets around us are inside a bubble inflated by the solar wind. On the outside of this bubble, space matter is completely different - it is not related to the solar system. It would be very interesting to study this matter, of course.

"This research was started back during the Soviet times. Well-known astrophysicists Vladimir Kurt and Mikhail Burgin were the first to obtain the first results of that work. American astrophysics continue this research now. NASA's IBEX (Interstellar Boundary Explorer) probe measured the parameters of the boundary more accurately, where the solar substance comes into contact with the interstellar matter. The spacecraft has this clarified several theories that we previously had.

"At first we thought that we lived in a balloon, inflated by the solar wind. Then he realized that the sun was flying in the galaxy. This ball is more like a tadpole - there are streams of interstellar matter blowing around our system, flattening the tadpole head and elongating its tail. Now, after the work of the American spacecraft, we imagine the solar system in the shape of an octopus, with several tentacles sticking out of its head. In other words, the solar substance moves further in several directions. On the contrary, in other directions, the interstellar matter presses the solar wind towards the center of our planetary system.

"The more we know about it, the more accurate our concept of the world around us will be. Voyager space vehicles have already reached the border, where the solar wind is in contact with the interstellar gas.

"For us, here on Earth, this discovery does not matter much, because we are deep inside the solar system. For astronauts and robots that explore space, this is very important as they fall under the influence of different streams of the solar wind. When launching a spacecraft into space, it is highly important to know exactly what kind of obstacles the spaceship will have to come across, whether the solar wind is going to be hot or not."