ISON (C/2012 S1) comet is approaching the Earth. The brightness of the comet can soon achieve the brightness of the full moon. When flying past our planet, the celestial body will leave a large number of particles. It will be possible to observe particles in almost every corner of the world. 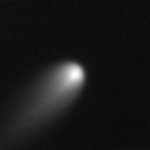 ISON comet will near Earth in December 2013, when scientists can obtain new data on the nature of comets. The comet was discovered in September 2012 by astronomers Artyom Novichonok and Vitaly Nevsky of the observatory in Kislovodsk.