Scientists have managed to conduct a fantastic experiment. With the help of electrodes they tied the brains of two rats living on different continents. 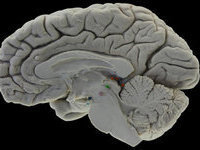 Neuroscientists from the Brazilian Institute in Natal brought electrodes to the cerebral cortex of a lab rat. The rodent transmitted the required information to another rat at a university laboratory in North Carolina, says BigPond News. This success opens up the prospect of creating an "organic computer", says Brazilian neuroscientist Miguel Nicolelis.

At first, the rats were trained to react to light and pull the levers, if they wanted to drink. After that, scientists implanted electrodes in the rats' brains; the electrodes were connected to a computer. The rat from Natal acted as a "transmitter" - its brain was generating a stream of electrical impulses required for the reward - water. The rat from North Carolina became a "decoder" - the rodent deciphered signals from the Brazilian rat, pulled the lever and received the desired reward.

The experiment, as scientists hope, will help to create a whole network of interconnected brains that will be able to interact with each other. Nicolelis stressed out that such experiments will be conducted only on animals and never on humans.