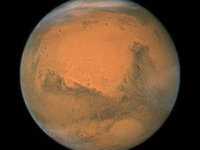 Astronomers predict a large-scale disaster on the Red Planet in October 2014, when a comet may ram into Mars, creating a 500-kilometer crater, the website of the Russian observatory ISON-NM said.

According to scientists, a catastrophe of global scale may occur on Mars. The trajectory of comet C/2013 A1, which Australian astronomers discovered in early 2013, will supposedly intersect with Mars. If it happens, the impact will produce an explosion, the power of which will be equivalent to 20 billion megatons of TNT.

The forecast is based on current measurements and will be updated as new data arrive. It was said that the comet was moving in the direction opposite to the planets of the solar system. Therefore, the speed in the possible impact will be very high - about 56 kilometers per second. The core of the comet is 50 kilometers large. A crater with the diameter of 500 kilometers may thus be formed on the crash site.